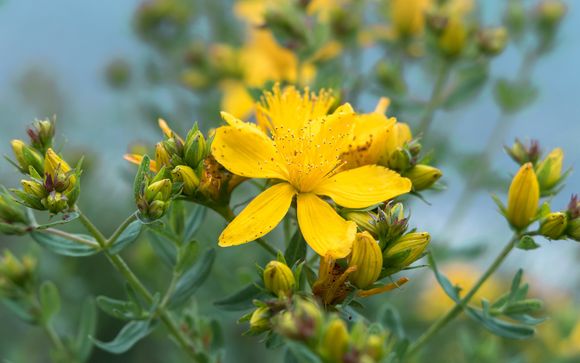 The beneficial effect of St. John's wort on a number of conditions has been known since ancient times. The herb has strong antibacterial, antiviral, analgesic and antidepressant properties.

Tall bare stem, strongly branched in its upper part, where the well-known inflorescences with their yellow color are located. Distributed throughout the country in grassy and overgrown areas, along roads, in sparse forests and clearings. Grandma's favorite for teas and beautiful bouquets. Blooms from May to August ..

I don't think many people would have had a hard time recognizing it, except for me in high school, when I almost slightly poisoned our respected volleyball coach with specially prepared tea from the herb in question, which subsequently turned out to be a completely different plant. One of the most characteristic hallmarks of St. John's wort is encoded in its name- perforatum , since looking against the light, its petals are dotted with numerous small holes, representing glands filled with essential oil.

So - Hypericum perforatum, or simply St. John's wort - is undoubtedly one of the most used herbs. Its history dates back more than 2,400 years and is full of cultural nuances and mystical legends about magical properties, amulets, the exorcism of evil forces and religious practices.

In other words, known since antiquity for its healing potential, St. John's wort has become an indispensable part of traditional medicine, and in recent decades it has managed to provoke a serious scientific interest.

Of particular importance and among the best-studied applications is the treatment of mild to moderate forms of depression, but in addition, modern science describes and confirms the other of its above qualities. 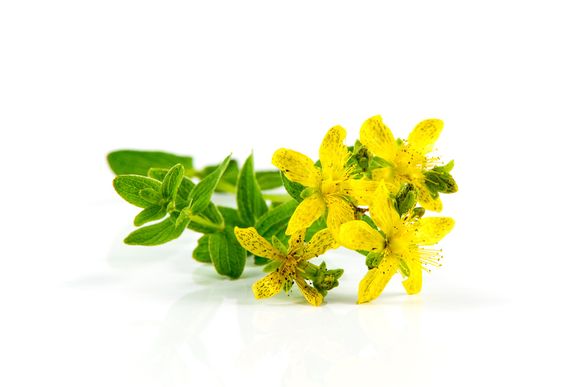 The herb is harvested  shortly before or during flowering. The above-ground leafy part with the buds and flowers about 20 cm below the top is used. Overblown stalks should not be collected.

Drying should begin immediately after collection in order to preserve the active substances. It is collected in loose bundles, which are hung for drying.

The dry drug contains all the listed compounds, as well as some essential oils, vitamins, carotenes and others. 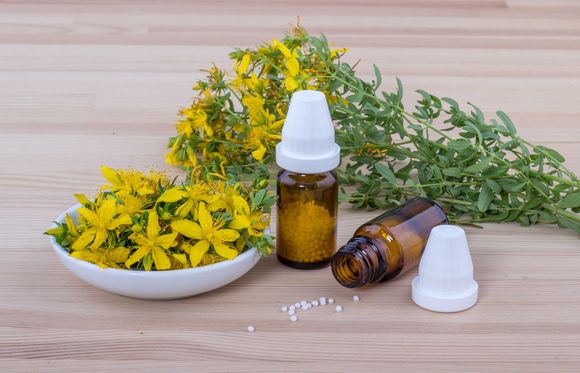 Let's start with the best studied action of the herb - as an antidepressant.

Depression is a common condition that affects our thoughts, the way we feel and significantly deteriorates quality of life. The herb has been used for centuries against depressive disorders and its use continues today as part of conventional medicine, especially in Europe [ref.3].

There are studies that explain the mechanism of action  [ref.4], as well as clinical trials. A large-scale review study from 2016 compared data from different clinical trials examining the efficacy of St. John's wort against depression  [ref.5]. The findings are that the mild and moderate forms of depression are affected by the herb as compared to placebo. The data is insufficient to judge about severe forms of depression, as well as about its side effects.

St. John's wort can increase the threshold of acute and chronic pain due to its analgesic properties. This action is known in traditional medicine and has also been confirmed in rodents and humans by modern research in the field [ref.6].

Even Dioscoride notices the beneficial effect of the herb in sciatica, and today there are already studies proving its effects in neuropathies. Taking the herb is also recommended for menstrual pain, toothache, otitis and others. 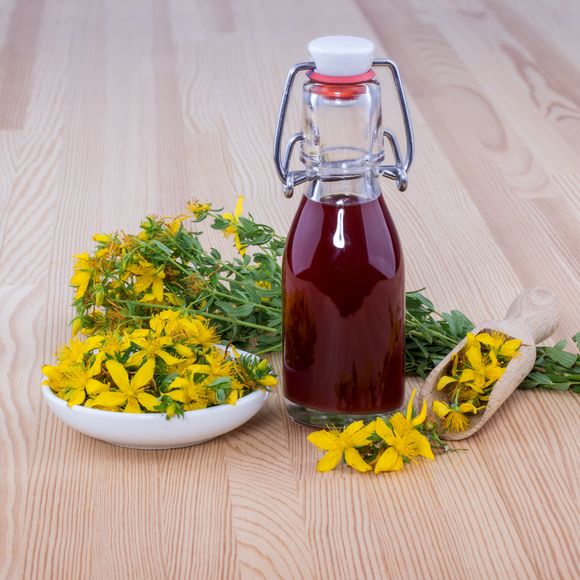 Here is the place to mention the favorite ointment of our grandmothers from olive oil and St. John's wort . Its miraculous action is not a coincidence at all. The herb has a highly stimulating effect on wound healing, as it stimulates the productionof collagen. In addition, antibacterial function helps the healing process further.

The recipe for St. John's wort in olive oil can be found below, as well in the article Russian folk medicine for healthy skin. Part 1: herbal remedies for vitiligo, infections, warts

As mentioned, the herb promotes the healing effect of mucous membranes - including those that cover the digestive tract.

Anti-inflammatory, as well as antidepressant properties are also beneficial, since the intestines and brain are more directly related than we think, and often stress is the unlocking mechanism for our digestive problems [ref.7].

Recipe for decoction of St. John's wort: 2 tablespoons of the dried herb are placed in 500 ml of boiling water for 5 minutes. Drink before meals.

Olive oil extract : About 100 g of the freshly harvested herb is soaked in 500 ml of olive oil and left in a sunny place for at least 2 weeks.

This extract can be applied externally for injuries, burns, abrasions or local neuralgic pain, rheumatism, etc. In Bulgarian traditional medicine, the 1 spoon of the extract can be also taken internally before breakfast, lunch and dinner. 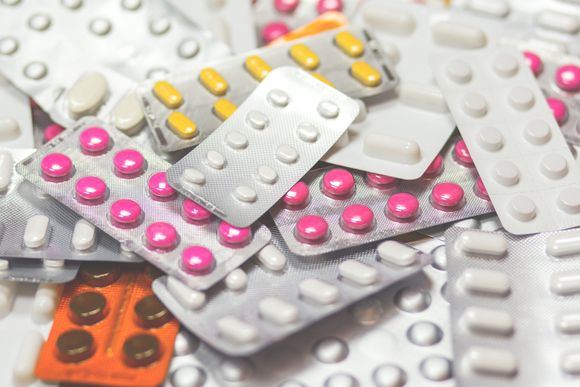 As my high school volleyball coach would surely confirm, the notion that natural remedies are harmless is very often wrong and can lead to abuse. And this herb, like all others, should be taken with caution [ref.8]:

Nature has given us priceless gifts, but it's up to us to use them wisely. :)