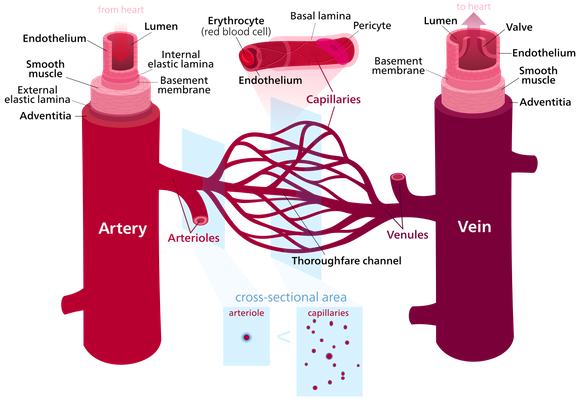 In this article, we will emphasize the specifics and activity of blood vessels. Only so we can explain the causes and ways of prevention of varicose veins.

The circulatory system, in particular the heart, was a real mystery until a very late stage of human development. From 1507 onwards, many of Leonardo da Vinci's works were devoted to this problem. Initially, his research was based on observations of freshly slaughtered oxen and pigs, and later he had access to human bodies, and each dissection had to be performed quickly during the cold months before the decomposition process progressed.

Da Vinci studied the heart valves, the passage of blood through them, and then used his mechanical knowledge to describe them. Although science was a hobby for him, today it turns out that he was aware of many things that, if published, would have been of great help to the then surgeons. With the dissection of the heart of a deceased 100-year-old man, he made the first known description of coronary heart disease, which is one of the most common causes of death today.

In the 16th century, survival after surgery was more a matter of luck than precision. The status of surgeons was very low and such knowledge would have led to an increase in their quality of work and thus cure more patients. Unfortunately, his notes on the subject were not discovered until the end of the 18th century [ref. 1].

By definition, the circulatory system is a collection of heart and blood vessels. Today, unlike da Vinci's time, from the young of us all it is clear where the heart is located and what its main function is. In this article, we will emphasize the specifics and activity of blood vessels, because only so we can explain the causes and ways of prevention of varicose veins.

The circulatory system is a closed system , that is, blood circulates only through the heart and blood vessels. Blood vessels are arteries → arterioles → capillaries → veins → veins.

What are varicose veins

Since the veins have a very weak, neglected smoothmuscular layer, for blood circulation they rely on the musculature of the body. As we move and exercise, our muscles shorten and help the movement of blood in the body.

However, if our daily life is often tied to prolonged standing in a chair, normal blood flow in the lower extremities is prevented. Of course, there are also people who have a genetic weakness on the wall of blood vessels, and they should initially be preventive of theproblem , if they are familiar with it before the symptoms occur.

Improper posture and immobilization in the long term lead to relaxation and deformation of the venous walls. An analogue with hemorrhoids can be made, since the problem is of a similar nature [ref. 2]. Correct circulation is disturbed, because the valves are gradually damaged. As a result, the one-way movement of blood is compromised, the external manifestations of varicose veins appear, and so slowly and steadily damages this blood system so important to our body [ref. 3].

How to prevent varicose veins