Every child will stare at the strange skin, and every chef will be annoyed by the food demands. Let's talk openly about autoimmune diseases. 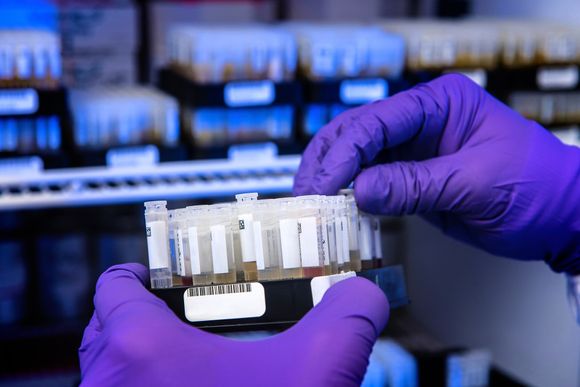 In addition to personal discomfort, very often this group of diseases affects the way we look (psoriasis, vitiligo) or our lifestyle (type 1 diabetes, celiac disease). Every child will stare if your skin looks weird and every chef will get annoyed if you have strict food requirements. That is why we need to be informed and our society to speak openly and freely about autoimmune diseases.

What is autoimmune disease

Normally, the immune system sends an "army of militant" cells to recognize, attack and destroy foreign invaders (e.g. viruses and bacteria [ref.1]) trying to"conquer" our body. The terrible thing about autoimmune diseases is that this powerful army makes a mistake at the first stage of "hostilities" - it does not recognize its own cells and treats them as enemy. Usually the immune system unmistakably makes the difference between foreign and own structures, but in autoimmune diseases, proteins called autoantibodies that attack our own healthy cells are released.

What is the frequency of autoimmune diseases 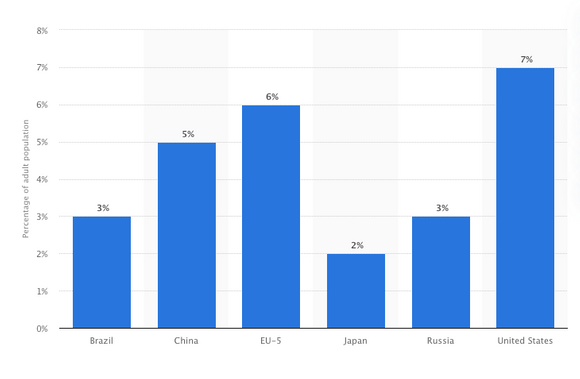 On the other hand,international statistics show that not3% but 7%of patients in theU.S.suffer from this type of disease [ref. 3].

Johns Hopkins explains the problem: not every country has a mechanism for continuously collecting data on the frequency and prevalence of autoimmune diseases, as is the case in infectious and cancer cases, the US is one of the countries that does not have such a mechanism, and for this reason the scientists of this university have collected data from countries that have a well-structured database in this regard (the Nordic countries e.g.)and have assessed theirprevalence.

As it becomes clear, Statistical studies in the field compared to other types of diseases are limited, but case studies and prevalence have increased significantly over the past 30 years. 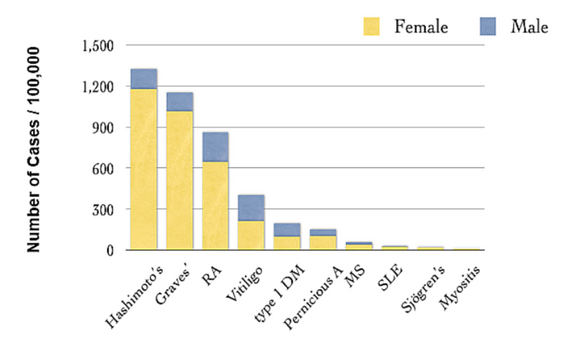 The majority of autoimmune diseases are more common in women than men, and there are also some, such as type 1 diabetes mellitus, which affect both sexes equally. The ten most common diseases in the US, and it can be said around the world (with a different share), are presented on the scheme. As you can see, in yellow is the proportion of those who fall ill of the fair sex compared to those of the strong - in blue.

However, in order to answer the question of who is most at risk, it is not correct to say that these are women. We need to know the causes of the occurrence of the autoimmune disease in order to determine whether we and our relatives are at risk. However, there is no firm opinion on this topic yet. Statistics look at some dependencies:

What are the 10 most common autoimmune diseases 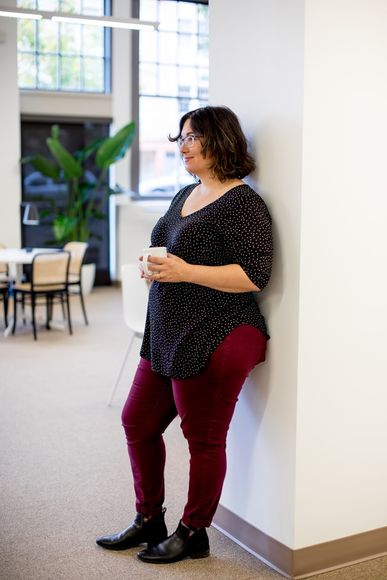 These are the 10 most common autoimmune diseases. Some of them target only one organ (Type 1 diabetes, which damages the pancreas), while others (Systemic Lupus Erythematosus (SLE)) affect the whole body.

Since these hormones affect metabolism, their excessive secretion (release into the body) leads to symptoms such as nervousness, increased heart rate, heat intolerance, weight loss and protrusion of the eyes outside the orbit (exophthalm). The last symptom (exophthalm) is optional, and studies show that it is observed in 30% of those who fall ill. Apart from this disease, the appearance of exophthalm can have a number of other causes.

In rheumatoid arthritis (RA), the immune system attacks the joints, leading to their inflammation. It should be distinguished from osteoporosis, which occurs with age. In contrast, RA can occur in young individuals even under the age of 30.

Symptoms are associated with the signs of inflammation itself - redness, warming, pain, impaired function (in this case - stiffness in the joints).

Vitiligo is an autoimmune condition in which pale white spots develop on the skin. The immune system attacks the cells in the skin (melanocytes) that produce its pigment - melanin. This leads to the demise of melanocytes or deprives them of their functions, and for this reason, discolored spots appear on the skin.

It can affect any area of the skin, but most often affects the face, neck, hands, skin folds. It does not cause discomfort to the skin, such as dryness, but sometimes the stains can er. The condition varies in each person, some have only a few small spots, and in others they are larger. It is impossible to predict how much skin will be affected.

Often, but not necessarily, it also occurs with other autoimmune conditions, such as hyperthyroidism [ref. 5]. 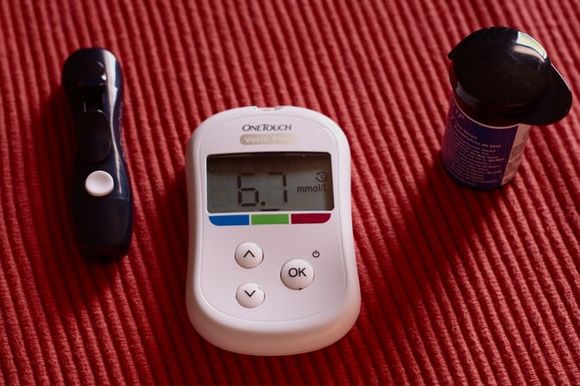 Type 1 diabetes is an autoimmune disease that affects beta cells (in the pancreas) that are responsible for producing the hormone insulin. This process has been going on asymptomlessly for months and years.

When there are already symptoms, it has already destroyed a large part of these cells (sometimes 90%). The condition is accompanied by high blood sugar, damage to blood vessels, kidneys, vision and nerve fibers [ref. 6].

Read more: All about type 1 diabetes in one place

Pernicious anemia is anemia with vitamin B12 deficiency (cobalamin). The reason is an autoimmune process that makes a person unable to produce the substance needed to absorb vitamin B12 into the small intestine. In turn, B12 is necessary for the proper production and functioning of red blood cells in the body.

Multiple sclerosis (MS) is an autoimmune disease that affects the brain and spinal cord. It destroys the protective myelin sheath of the nerves and, accordingly, damages communication between the brain and other parts of our body.

New approaches to the treatment of multiple sclerosis in Europe 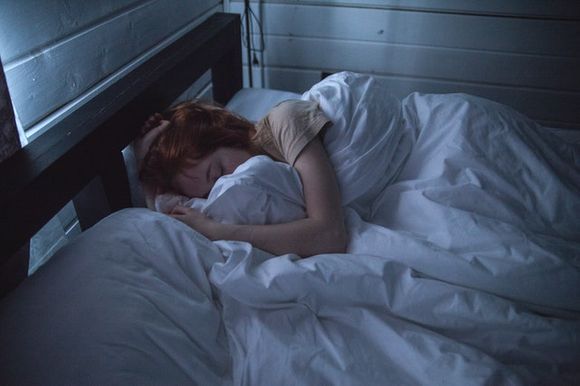 When the disease was discovered in 1800, systemic lupus erythematosus was thought to be a skin disease, judging by the rash, which is the most prominent symptom. However, the disease can affect any organ or system of organs, most often these are joints, kidneys, brain and heart.

Joint pain, fatigue and rashes are among the most common symptoms [ref. 9].

Sjogren's syndrome is an autoimmune condition that attacks the glands. It can occur at any age, but most often affects elderly women. Often the syndrome develops alongside another autoimmune disease, such as rheumatoid arthritis or lupus.

Symptoms are dry eyes, mouth and vary in appearance and intensity. Many people are able to lead a normal lifestyle.

Treatment is associated with alleviating the symptoms of dry eyes, mouth and, accordingly, preventing complications such as infection and dentaldiseases. Therefore,regular medical care and follow-up are important for all patients [ref. 10].

Myositis is an inflammation of the muscles. Inflammation directly affects muscle fibers. The disease can be triggered by autoimmune diseases such as lupus, rheumatoid arthritis and others.

Among the symptoms of myositis are fatigue after walking or standing, problem with swallowing or breathing. 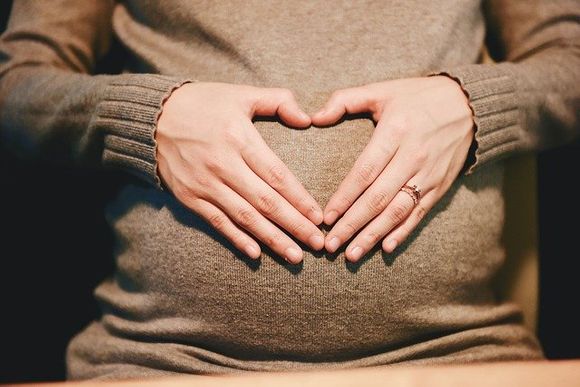 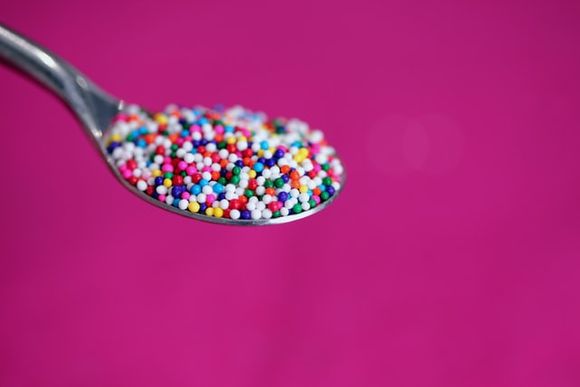 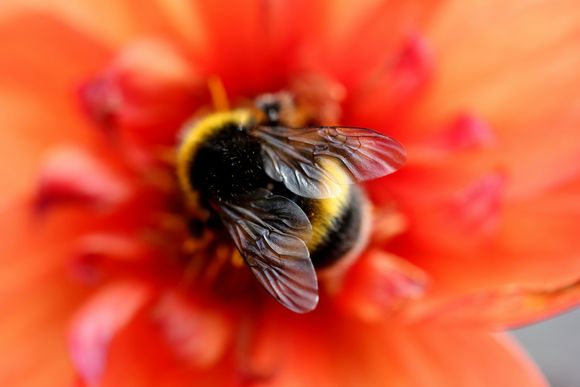 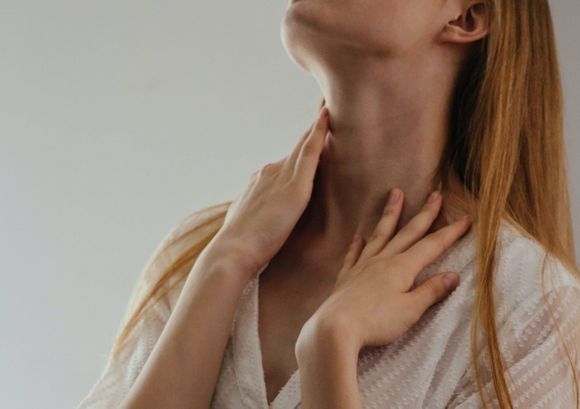 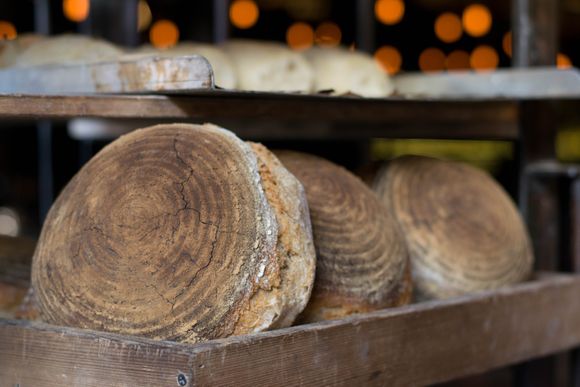 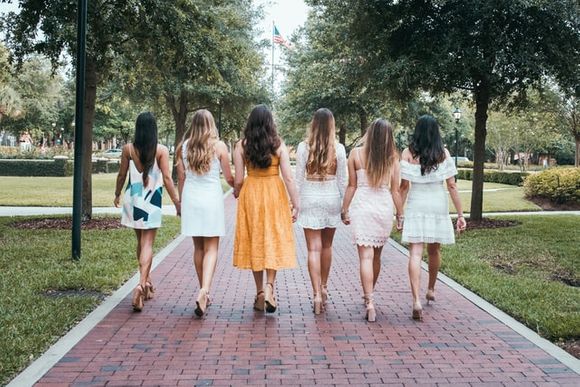