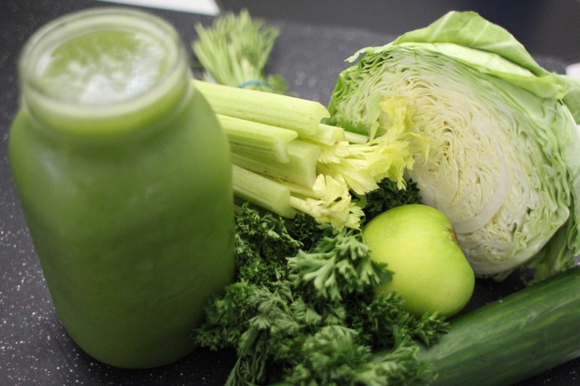 Parsley, celery and other anti-cancer herbs

We are used to only embracing herbs as a healing agent, but scientists do not fail to look for such properties in the plants we consume in the form of food or spices.

For thousands of years, plants have been used as a source of health. We are used to only embracing herbs as a healing agent, but scientists do not fail to look for such properties in the plants we consume in the form of food or spices. Including in the fight against cancer [ref. 1] – there are currently over 860 scientific publications [ref. 2] that link apigen and cancer treatment.

One of them is parsley, and in it is the active substance apigenin. In this article, we will try to consider in detail the sources and properties of apigenin, and we will focus on the mechanisms behind the established anticancer action of the substance in detail. We'll find out if we can name parsley and celery anti-cancer herbs.

In the article you will find out:

What herbs and foods contain apigenin

In addition to parsley, apigenin is also found in chamomile tea (Matricaria), celery (Apium graveolens) [ref. 3], apples, red wine and grapes. It is one of the active ingredients in Chinese traditional medicine, but its anticancer effectiveness was found by scientists only in 1986 [ref. 4]. 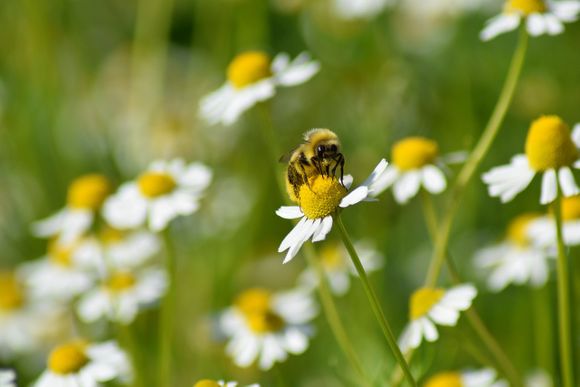 Other good sources of apigenin are grapefruit, onions, oranges and is also found at higher levels (compared to other foods) in some herbs:

It is also found in beer and is an active ingredient of Ginkgo biloba.

Approximately 0.8–1.2% of the weight of chamomile is given to apigenin and this makes it one of the most significant sources of the substance.

This means that we unconsciously take apigenin with our food if these plants and drinks are part of our menu.

Apigenin is designated by the chemical name 4′,5,7-trihydroxyflavon and belongs to the group of flavonoids [ref. 5] – these are small molecules of plant origin for which it has a proven antioxidant, anti-inflammatory and anticancer effect.

All this, along with the low toxicity [ref. 6] of apigen and its inability to induce mutations, has directed the interest of researchers to explore its potential for cancer treatment.

Apigenin does not dissolve well in water, but it has been found to be eliminated from the body relatively slowly [ref. 7] (at least in rats), which gives hopes that the substance can accumulate and thus exert its therapeutic effect.

This substance also has antiviral and antibacterial effect and lowers blood pressure [ref. 8]. 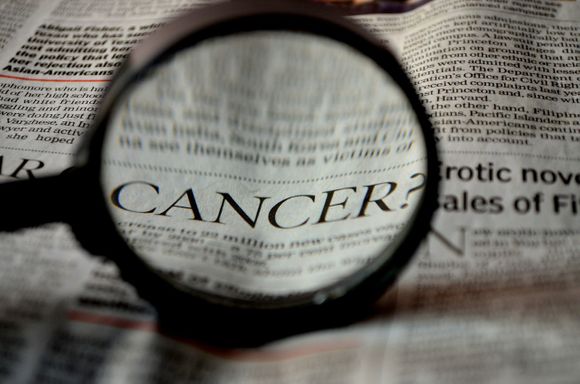 Effects of apigenin on cancer

Apigenin has been found to inhibit the development of various cancers in humans, both in vitro (in laboratory conditions) and in ivo (in the living organism).

Research continues on different types of oncological diseases and the results are promising.

It is important to note that apigenin is considered as an adjuvant substance – in combination with chemotherapy or radiation therapy the results are best. As the development of resistance of cancer cells to widely used chemotherapeutics is observed, new molecules and active substances are sought to replace or supplement them.

It is important to know the habits of the enemy in order to defeat them. So here we will delve a little more into the mechanisms by which apigenin acts on cancer cells to suppress them.

Characteristic of cancer cells is that unlike normal cells that make up our body, they do not stop dividing. In the life cycle [ref. 14] of a simple cell there are checkpoints, checks and stop signs, rules with which it "complies". But for cancer cells, the rules don't apply and they multiply uncontrollably — the process of multiplying is called proliferation [ref. 15]

When the cell is not a cancer cell and a dangerous mutation appears in it, its genetic material is either being repaired, or the cell goes the way of programmed cell death or apoptosis [ref. 16] — it kills itself to protect the body from the onset of cancer. But the behavior of cancer cells differs — they do not kill themselves.

Another feature of the cells that go down a bad path is that they leave the place where they arose and spread to different parts of the body — thus the tumor metastasizes.

Apigenin interferes with all these processes. It has been found to inhibit the proliferation of cancer cells by causing apoptosis – thus the number of damaged cells decreases. The substance also triggers a process called autophagy [ref. 17] or "self-eating" of cancer cells.

Another mechanism by which apigenin restricts the development of cancer cells is by modulating their life cycle in a way that stops the division [ref. 18]. It restricts their mobility and inhibits their migration to other organs and tissues – this reduces the risk of metastases.

Another mechanism of action has been found, which involves stimulation of the immune response [ref. 19] of the body.

If we need to go even deeper into the processes at the intracellular level, we will get to many different signaling pathways on which apigenin has and effect. Here we will only mention them for the most curious: PI3K/AKT, MAPK/ERK [ref. 20], JAK/STAT, NF-κB and Wnt/β-catenine.

Amazingly, this substance acts simultaneously on several different processes in the fight against cancer - for example, it can simultaneously cause apoptosis and autophagy, or apoptosis and retention of the cancer cell at a certain stage of the cell cycle, which stops its reproduction.

Apigenin has e potential to become part of cancer treatment

Apigenin is studied as an aid to be combined with chemotherapeutics to overcome resistance to them, but can also be used as a dietary supplement to alleviate their severe side effects.

Currently, strategies being developed to fight cancer include one of the following mechanisms: inducing autophagy or apoptosis, suppressing the ability of cancer cells to move to other organs and tissues, regulating the life cycle of cells or immunostimulation.

As we described above, apigenin possesses all these activities simultaneously, and this has been demonstrated in many different types of cancer. 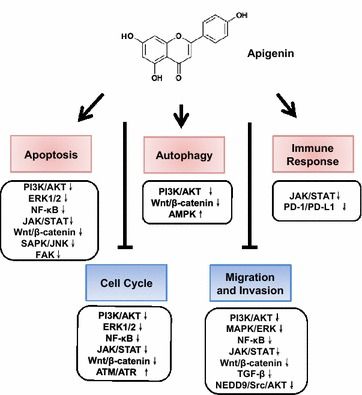 Apigenin causes apoptosis, autophagy and immune response and suppresses the life cycle of cancer cells, as well as their migration and invasion into other tissues, affecting various signaling pathways in the cell. The ↙ indicates a challenge, and the ⊥ indicates a blockage of effects. The arrow ↑ indicates stimulation and ↓ indicates suppression of the signal path. Credit: Xiaohui Yan et al. [ref. 1]

In addition, apigenin exhibits a strong selective cytotoxicity - this means that it only affects cancer cells without causing harm to normal cells. This phenomenon also affects the cells that are the basis of recurrence in cancer, metastasis and resistance - cancer stem cells [ref. 21].

It is not yet known what mechanisms are behind this apigen property and more research on the subject is needed.

Unfortunately, the independent anticancer activity of apigenin, although impressive, remains insufficient in the application of physiological concentrations in humans.

Studies have shown that high efficiency is achieved with the simultaneous administration of apigenin and chemotherapeutics such as paclitaxel or cisplatin. Thus, their action is mutually reinforcing - apigenin complements their action by influencing different signaling pathways, and cancer is attacked on several sides simultaneously.

In addition, several studies indicated a protective effect of apigenin - for example, its administration together with cisplatin in a study in mice protects them from the toxic effect [ref. 22] of chemotherapeutic on the kidneys (nephrotoxic effect).

What are the disadvantages of apigenin

Apigenin is poorly soluble and easily passes through the intestinal wall - it belongs to Class II in the Biopharmaceutical classification system. Therefore, its bioavailability is determined by the degree of solubility - and in this case, it limits the passage of the substance into the blood. This means that apigenin remains largely inaccessible to the body when taken orally.

This is the reason scientists look for methods [ref. 23] to modify apigen in a way that will increase its solubility and thus its bioavailability and therapeutic effect.

Recipe for a delicious and healthy smoothie

To finish this article, we have chosen an easy recipe for a  parsley or celery smoothie.

You need a blender. Put nut milk - almond, soy, coconut, according to taste, in the blender. Add parsley or celery, bananas to give a creamy texture and other fruits for sweetness and a more pleasant taste.

Experiment until you find the combination that suits you.

In the video you will find another idea for a green smoothie.